The students of Pathways College are taking part in a sci-fi film project along with some of the residents of the Cavell Court residential home.

The project is organised and run by Eastern Region Media CIC and will run for 10 weeks.

The students have been to meet some of the residents of Cavell Court to talk to them about their memories of film and sci-fi in order to gain some inspiration!

The residents of Cavell Court have been making props for use in the film, pictures of which can be seen below.

When complete, the film will be screened at The Forum in Norwich. 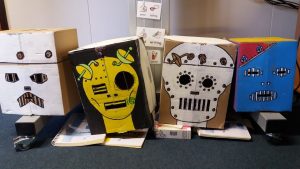